Devin White started playing adapted sports at 8 years old, and he hasn’t stopped since. From basketball to football to handball, he played it all.

White grew up in Stone Mountain, GA, after being born 10 weeks early. Diagnosed with auditory neuropathy at 18 months old, White’s challenges didn’t end there. He developed Glaucoma in his left eye and was later diagnosed with Cerebral Palsy, but he hasn’t let any of these diagnoses stop him from achieving his goals.

In 2010, at 8 years old, White explored the possibility of adapted sports and began playing for the Dekalb Silver Streaks in 2011.

“I thought it would be a good fit since I am so athletic it would challenge me to learn to play in a wheelchair while giving me the opportunity to play in a team sport and be competitive,” White said.

For the next ten years, White played for both adapted and able-bodied teams, but the benefits went far beyond just playing sports.

“Being a part of the DeKalb Silver Streaks provided me with a sense of a team and family where I felt inclusive despite my disabilities,” White said. “I wasn’t judged nor made to feel any different.”

He began to rise up as a leader on his teams, too. Those ten years gave him not only plenty of memories but plenty of important life lessons, too.

“I learned to be determined and never give up despite my disability,” White said. “I learned how to work as a team player and how to be a leader.” 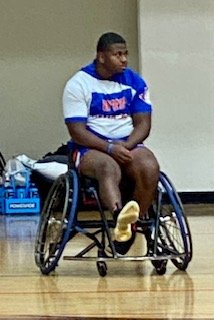 White accomplished one of his dreams in 2021 when he signed a scholarship with the University of Texas Arlington to play adapted basketball. He had several other offers from different schools and was accepted into 14 different universities. He graduated from Druid Hills High School with Honors in 2021, and he currently studies broadcasting at UTA, where their adapted basketball team has won the national championship for the last two years in a row.

Looking back at his time with AAASP, White advised current athletes to dream big.

“Enjoy your time on the team and have fun, for one day you can play at the collegiate level and even possibly for the USA Paralympics team,” White said.