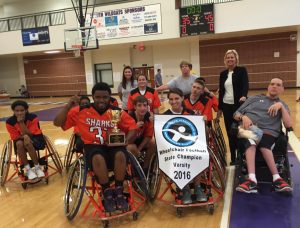 The Houston County Sharks hold on to beat the Gwinnett Heat 45-35 in the 2016 wheelchair football state championship game on Saturday, April 30th at Duluth High School.

The Sharks scored touchdowns on all four of their second-half possessions to pull away after the two sides were tied at the half. It was a great battle, spurred by a mid season defeat by the Heat that snapped a 64-game Adapted Sports Winning Streak.

It was a great effort by both teams to finish strong — but the Sharks prevailed.

In other scores from the day, the West Georgia Wolverines defeated the Henry County Hurricanes 35 – 21 to take the 2016 Junior Varsity State Football Championship Title!