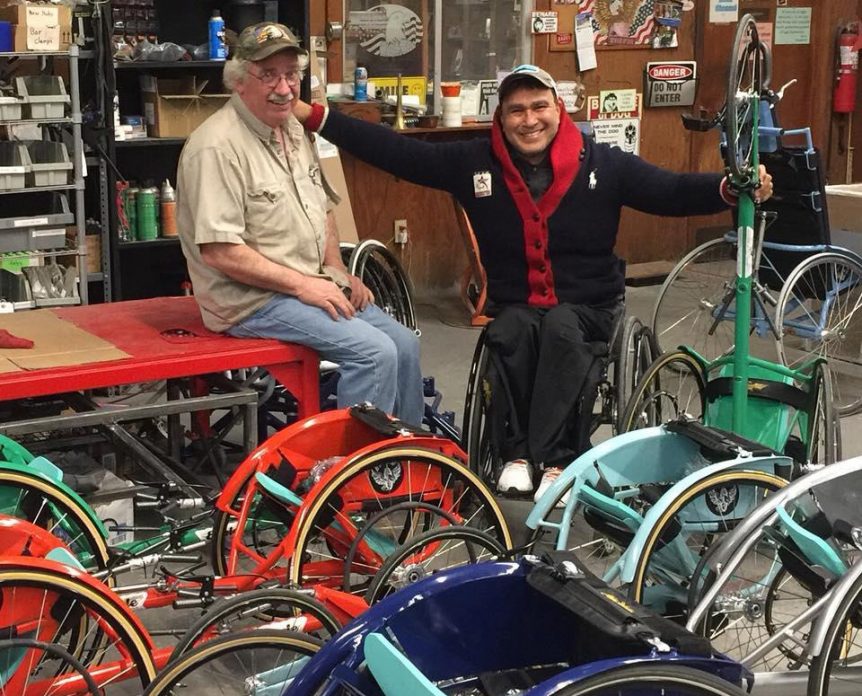 Barry Ewing has made it his life’s work and mission to support adapted sports through his company, Eagle Sportschairs, as well as giving back personally to a sport he loves. He was introduced to wheelchair basketball in 1979 when a relative was paralyzed in a car accident. He quickly realized that he had the skills to build a wheelchair that would be much more athletic than the old heavy folding chairs. He began building wheelchairs in the basement of his home. In 1980, Barry founded Eagle Sportschairs with a goal to provide elite sports equipment that is highly usable and affordable by the professional and recreational athlete.

Barry attended DeKalb Tech for Machining and Electronics and is self-educated in engineering. The mission of Eagle Sportschairs has always been to offer top quality equipment at very  competitive prices. Over the years, he has an impressive resume of giving back to the sport,  not just through Eagle Sportschairs, but with his time and talents.

In 1996, when Bev Vaughn, Co-Founder and former Executive Director of AAASP, first told Barry about her plans to bring adapted sports to schools, he believed in the mission. He thought reaching students through the schools was going to be very influential on the future of wheelchair sports. It would help to ensure adapted sports student athletes who previously did not have access to coaching and equipment would have the opportunity to get involved and those who were already participating would benefit from being on a team and having more opportunities to compete. The movement to make athletics accessible to all through schools also motivated Barry to design the multi-adjustable court and racing chairs enabling teams to serve more athletes.

Barry enjoyed working with AAASP and the coaches he met through the program. His reward has been seeing many young athletes graduate and go on to enjoy sports at the  college level and compete Nationally and Internationally. Today, he continues to support AAASP through innovation in design and competitive team pricing. We can’t thank Barry enough for his dedication to AAASP over the years, and for continuing to help us get kids off the sidelines and into the game!