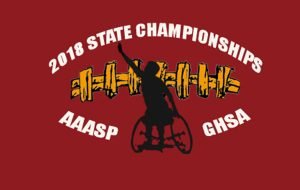 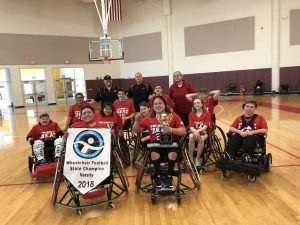 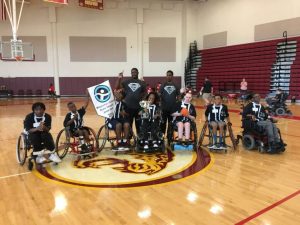 Congratulations to Gwinnett  and DeKalb on winning the AAASP/GHSA #WheelchairFootball State Championships!
Varsity Division
The Gwinnett Heat won the AAASP/GHSA Varsity Wheelchair Football State Championship over the weekend at Maynard Jackson High School in Atlanta.
It was an intense championship, with the Heat defeating the perennial champs, the Houston County Sharks, 36-34.    The Sharks, which had won the previous seven state titles in the sport, gave the Heat a fight–but the undefeated Gwinnett Heat won the battle, winning their first wheelchair football state championship for the Gwinnett County Public Schools program since winning back-to-back crowns in 2010 and 2011.
The Heat got out in front early;  Seth Earley led all receivers with three touchdown receptions by Will Millikan, including two on critical third-down situations.  Millikan added nine points on three field goals and rushed for one touchdown.  Houston County Sharks played tough in the 2nd half, staging a strong comeback with 21 points, cutting Gwinnett’s lead to two points, but the Heat took over for their last possession with 1:08 left in the game and ran the clock out to lock in the victory.
JV Division
DeKalb wins their first AAASP/GHSA Junior Varsity state championship in #wheelchairfootball; Houston County Junior Sharks take 2nd place.