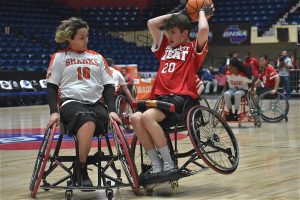 Jordan Kozloski remembers the day she joined the Houston County Sharks vividly. After getting a call from her future coach, Christy Jones, second-grade Kozloski went to a meeting with others who were interested in wheelchair basketball.

She saw a piece of paper with colorful logos and mascots for the different teams. Having been obsessed with the movie Jaws and sharks at the time, the choice was easy.

“I was asked if I liked any of the logos, there was a bumblebee or butterfly…” Kozloski recalled. “And I said, ‘I like the shark, with the orange and black.’ Since then, it stuck.”

Two-year-old Kozloski was about to leave to go to the store with her mom. While her mom searched for her keys, Kozloski had slipped out the backdoor to the yard where her father was mowing the lawn. She had been trying to say goodbye to her dad, but the sound of the lawn mower overpowered her voice.

And it overpowered the sound of her mom yelling to stop as her father accidentally backed up over Kozloski’s leg.

But Kozloski said that day wasn’t meant to stop her, and that God had a plan. Now, at 21 years old, she’s participated in golf, running, swimming, even bowling. She fell in love with basketball, though. She was turned down for able bodied basketball because she said they thought she wouldn’t be able to keep up, but that didn’t stop her either.

So when that call came in from her future coach, Christy Jones, she couldn’t refuse.

“This was my chance to put myself out there and be who I am.” Kozloski said.

Kozloski said it wasn’t just a chance for her, though. It gave her the opportunity to help others be themselves, too.

“I got involved because I realized that at the time there weren’t many representatives of disabled athletes or people for that matter,” Kozloski said. “I wanted to help bring it to light.” 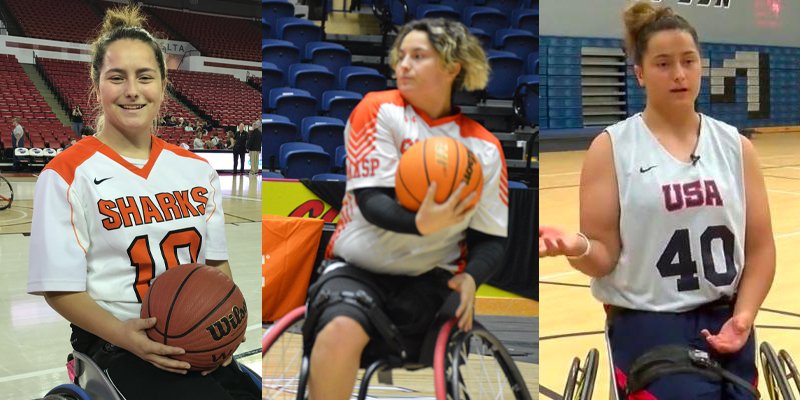 It was more than just representation, though.

“Being a part of a team, making new friends, meeting new people was exciting for me,” Kozloski said. “It has been such an incredible experience being a part of AAASP. It has given me such amazing opportunities that I wouldn’t be where I am without this program with such passionate people.”

Those experiences have never left Kozloski, and if you ask her what she’s really proud of, it’s not just the four rings or 23 state titles.

“[It’s] paving the way for opportunities to college for other athletes in middle Georgia who didn’t think it was possible for them, opening that door for them,” Kozloski said.

Kozloski advises those athletes to stick with it, give it their all, and don’t take it for granted for a second.

“Enjoy the moment, breathe in the rubber. See those marks on the gym floor? Take it in,” Kozloski said. “If you are not sweating, bleeding from blisters on your hands, or even breathing hard, you didn’t push hard enough. Be strong mentally and physically, you’ll be surprised by the results. I believe in you! Enjoy the ride.”

Kozloski went to the University of Arizona on a full-ride scholarship for wheelchair basketball and was part of a group of women who helped jumpstart the program there. She had to withdraw from school due to financial difficulties her junior year, but just like with every other bump in the road, Kozloski isn’t letting that stop her.

Now, she’s in California gearing up to try out for the USA Olympic wheelchair basketball team. She tried out when she was 16 and made the on-call list, and this year, she’ll be back again for another chance to play.

There certainly hasn’t been a shortage of challenges, but Kozloski said she won’t let those things stop her.

“I have learned to have fun, and if you are passionate about something, light that fire inside yourself,” She said. “Push yourself and be flexible. Be coachable. It’ll take you far. But most importantly, never give up. No matter what.”