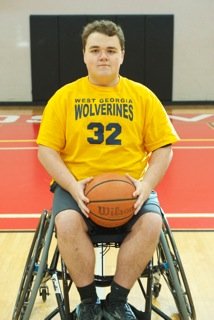 Meet our AAASP alumni spotlight Jesse Cochran. Jesse was born in Columbus, GA, and raised in Manchester, GA. He is currently 20 years old but was first introduced to Adapted Sports with the West Georgia Wolverines in Warm Springs GA at the Frank C. Ruzycki Center while in middle school.

Growing up Jesse didn’t have a lot to do due outside of school and video games because of his physical limitations, due to issues with his hips and legs he wasn’t physically able to compete in able-bodied sports. As time went on sitting around and playing video games became mundane and he decided to give AAASP a “shot”. He says, “Admittedly, after the first practice, I almost didn’t go back because I didn’t think it was for me. Fortunately, I decided to go back to a second practice the next week and after that, I was fully involved with the Wolverines!”

For the next 5-6 years he was very active and participated in Wheelchair Football, Basketball, and Handball. Jesse played for the West Georgia Wolverines until 2020; then joined the Henry Hurricanes.

Throughout his time playing in AAASP a lot was accomplished, two Varsity Wheelchair Football state championships, two Wheelchair Handball state championships, and one JV Wheelchair Basketball state championship, “give or take a few”, he says. When asked what he is most proud of, he will tell you all about his last season with the Hurricanes. “The thing I’m most proud of was my final run in AAASP in 2020 with the Hurricanes where we went undefeated in the regular season. Even though that season didn’t end up in a state championship, I still regard that as one of my greatest accomplishments, from beating the Sharks for the first time that I can remember in the first game of the season, to coming back down 18 against the Heat, to going undefeated through the regular season, that team during that season was able to accomplish a lot in a short amount of time. It was crazy because we were only really formed a week before the season started, and didn’t have a lot of time to get accustomed to each other or even form a game plan. With all that being taken into context, it probably is the thing I’m most proud of during my time in the league!”

Jesse will also tell you that Adapted Sports teaches many things, including how to be an athlete, leadership, and perseverance, but as Jesse says, “it also teaches the self-discipline it takes to be successful as an athlete and outside of athletics. One of the takeaway lessons I learned was that regardless of the situation, hard work and determination in whatever you’re doing will take you where you want to go.”

Jesse signed with Southwest Minnesota State University in his senior year of high school to play Wheel Chair Basketball competing with colleges around the country, he says playing at this level is really tough, especially if you’re a higher classification, like he is.

On a scale of 1.0 – 4.5, Jesse is a 4.0, scoring 14 points on the court at a time! Since playing with SW Minnesota State for the past 2 years he has improved so much that a few months ago he even set a new career-high at 16 points!

There is so much for Jesse to look forward to but for now, he says, “My goals for the future as of right now are pretty simple, graduate college and pursue Wheelchair Basketball as far as it can take me! Right now, I’m a Sophomore in college so that’s a while away!”

Having such a great experience with AAASP Jesse has some great advice to others entering the program, “If you’re looking to pursue Wheelchair Basketball seriously in high school or even into college, look into going to the summer camps for Wheelchair Basketball that are hosted by college teams like Alabama, Auburn, SMSU, UTA, Etc. They really taught me a lot of skills that helped me improve quickly.”

We are excited to see where wheelchair basketball takes Jesse and know that he is and will be an inspiration to many!